Making an impact is often a very overestimated action. It is true that to advocate it does take a lot of mental and physical strength, but it can never be considered “hard.” To prove this claim, the works of many famous teen and adult activists are brought forward. Even if they do seem all-powerful now due to the immense amount of change which they have worked toward inflicting in the world, it is important to remember that they are still the same human beings as any of the individuals living right now. They too were raised in varying countries and shared the same experiences as most living in their areas. These similarities also often defined their beliefs of their own ideas or of ideas provided to them by others. Still, they managed to make a change which many could only dream of. But how? Even if the idea which later grew into their change of the world was shared by many, the method with which they approached it differed from the rest, making a foundation which would later support their protests. Their strategic thinking, which was directed toward starting up their impact, was one that contrasted the perspectives many held of making a change, but it proved to be the most efficient and beneficial method to truly persuade others about a cause the teen activist was passionate about. By focusing on the smaller aspects of their lives first, then steadily building up toward the greater ones, not only are the individuals able to gain more support for their protests, but they can also strengthen their opinions on a cause by creating an early platform which will be able to support their protests with more strength if they ever reach global level. 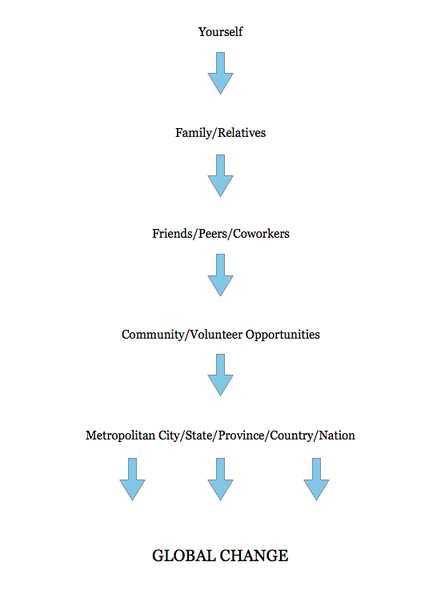 It is not enough to consider believing in a concept as being involved in its portrayal to the world. Although thoughts have much power throughout the modern world, actions which back up the ideas those thoughts portray obtain the power of influence at a much higher level. This increase in power is one which is shared by many throughout the world. Specifically, those who have made an impact. By motivating themselves to actively participate in the idea they are actually trying to portray to the world, making a difference globally came much easier. However, the thoughts or actions of one still don’t have enough power to truly make a change at a global level without any support. This claim is true because without accurate evidence to back up an opinion, the wide variety of ideas contributed by others in response to the claim made by one are too overpowering. But, the works of many famous activists who started out as worthless additions to society have proven how it is possible to portray one’s initial opinion at a global level by supporting it through strategic planning. The diagram above portrays a realistic plan which can be followed to reach global change. By starting from introducing the topic to one’s own lifestyle and mindset, then steadily increasing the opinion’s reach to bigger and more important aspects of society (along with building up a group of people who agree with one’s cause), it is possible to make one’s opinion heard in the most powerful way. The reason why this method of approaching world-wide impact does truly produce results is because by starting small but still thinking big as one introduces their topic to the public, the individual builds up a strong foundation of evidence from their early sharings, which later helps them send their message out to bigger groups because their anticipated audience can see the amount of evidence built up behind their protests.
A problem doesn’t always have only one solution, meaning that an advocating individual can never only approach a want for change through only one way. Following on to how by starting small and building up toward bigger and powerful aspects of society truly makes make an impact globally easier for others to understand, it is important to take a special insight into why it is easier for the public to understand the protests of one (or a group) when they are backed up by the smaller actions they have portrayed before. As shown in the diagram, the initial step to starting an impact-led lifestyle is relating the opinion to one’s own lifestyle, seemingly becoming immersed in the whole idea. Despite that, the levels of the diagram which follow have multiple examples with which a person can expand their protests, creating many “paths” one could take. Still, these “paths” are often interpreted as carrying only one form of solution to a major problem which an individual is trying to change. However, this claim is not entirely true. Many people have often faced times where by fixing one aspect of a problem, another part decides to fail next, causing a chain reaction. This similarity that is seen commonly throughout the world is what motivates people to truly believe one’s cause due to the platform their early strategic method of protest has built for them. It is true that many problems have only one side, making them easier to solve, in theory. But, since protests are often created from debatable issues where there are more than two sides evident, an activist has to approach the problem through different paths, while still following a strategy similar to the diagram shown below. By applying the many ideas of solutions to their own lives, sharing them throughout the community, and portraying them to the nation, the young individuals then truly build up a structure of support for their careers as activists due to the fact that it is evident how their whole lifestyles are directed solely to the cause because the many chances they have taken to make their dreams of worldwide change become a reality. So, not only is it important to follow a strategic plan which by starting small but still having great thoughts will bring powerful protests, but it is especially significant to also strategize the contents of the problem itself by approaching its intensity with different solutions which all cover the different aspects that it beholds. Below is another diagram, focusing specifically on the journey of the protests of an exceptional young boy, Craig Kielburger. ​ 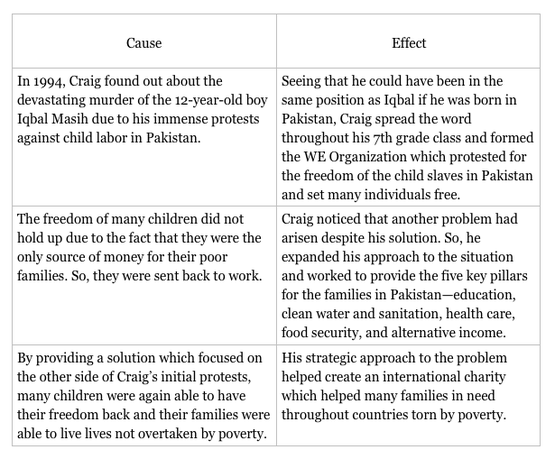 *All information received from www.wecharity.org/about-we-charity/our-story/

​
The diagram above shows an example of the effective ways the bright individuals of society use to make an impact. When Craig’s initial plan did not come out as planned, instead of giving up on the cause, Craig instead persevered to find another approach to the problem he created. In the end, starting as a normal 7th grader, Craig Kielburger proved both claims made in this chapter, how impact can be made only from the creative thinking which overtakes one’s mind daily, and how a problem always has multiple faces and to truly solve it, both faces have to be acknowledged.
World-acclaimed author and sports broadcaster David Icke once said, “Today’s mighty oak is just yesterday’s nut, who held his ground.” His words accurately portray the perseverance every teen activist beholds throughout their journey from a small opinion to a big protest. Along with his reasoning and the evidence shown by many of today’s most famous activists, one seeking to make an impact can come to the claim that by starting small, but still obtaining big ideas, anything can happen.
​A Concluding Statement
“Success is dependent on effort.”
—Sophocles

What is an activist? Throughout all of history, there were many occurrences where the voice to make a change came out of the mouth which was least expected. These unique individuals which chose to set themselves apart from others worked hard to introduce their views into to the indigenous perspectives already written down in the foundation of society. However, it is important to notice the specific traits which set apart teen activists.

—Teen activists don’t choose to join in on protest. Instead, they want to make their opinion heard, making their stance so much stronger due to the dedication they put forth.

—Teen activists don’t idolize their ideas only. By incorporating the ideas of others into their plan to change the world, they understand that their stance would be much better supported.

—Teen activists don’t break down when coming up to an obstacle. Instead, they try to take many measures to ensure that the burden doesn’t turn the problem which has come into their focus into a much greater wall of adversity, proving the amount of bravery these young individuals possess and how much willingness is put into their actions for the benefit of their cause.

The opinions of adolescents were considered “worthless” throughout many time periods in society. Due to the minority they seemingly hold up in our world, the opinions of the young were many times shut out from important debates on concepts due to the distrust many portray in their ideas. Still, just like a willow tree does not let itself be overcome by the ferocious wind, the voices of children came back, utilizing methods which many adults could never even dream of. Their immense perseverance and strategic protests truly made a difference in the world, showing the generations to come how with enough effort, any dream, no matter how small, can become a reality. ​
​Author’s Note

Although this book only explains the main points which contribute to the succession in truly making an impact, many still wonder, well, what can I do? How can I become as successful as the famed teen activists which are seen on the news? So, below is a list of methods which one can follow to better understand how to make an impact themself.

—Create a topic which is interesting and worth debating.

—Persevere through obstacles because any force always has an equal counterforce.

—Always strive to do more, to achieve a greater solution, to make a bigger impact, because no problem can be fixed entirely.

—Incorporate the ideas of others into your protests, as the views of others often bring new perspectives which are not found throughout one mindset.

—Enjoy the protests which are influenced because the impact won’t be truly meaningful if its creator is not involved in its portrayal to the world.

“100 Years of Youth-Led Social Activism.” Center for Community Change. N.p., 30 Apr. 2014. Web. 22 May 2018.
About the Author
Maya Belorusskiy is an eccentric 13-year-old living in the northern suburbs of Chicago. Along with being an avid writer, Maya also enjoys reflecting on her past readings, trying to produce the best musical pieces with her cello- and piano-playing career, and elaborating on topics not typically elaborated on. Her love of writing has grown with the help of countless individuals whom she has met throughout her baker's dozen of years on planet Earth, including countless teachers, librarians, and her family. She is very excited to have her first published piece, a short novel about making a difference, “A Way to Impact,” up and ready for the readers of Body Without Organs Literary Journal to see.