BODY WITHOUT ORGANS
Helena Pantsis (18) is a student of psychology from Australia who occupies her free time dabbling in the art of writing and mixed media. More of her work can be found on her website, her Twitter, or her Instagram. 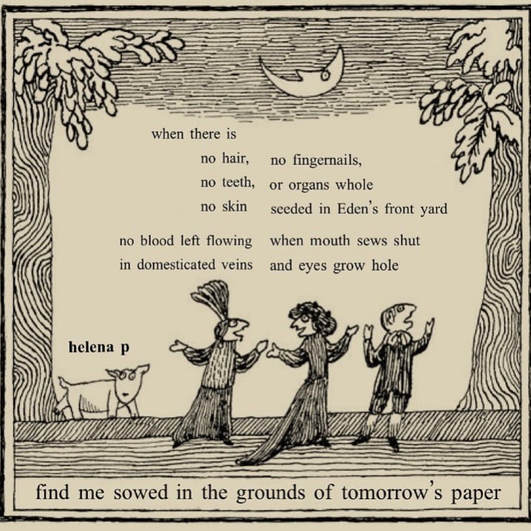 A Conversation between Helena Pantsis and Lily Bechtold

1. Hi, Helena! Thanks so much for taking the time to chat with us today. Your work is so unique, visually and in terms of style—where do you find inspiration? Do you tend to draw from your own life or beyond your own experiences when creating a piece?

I think my shorter works tend to act as a greater reflection of my life, allowing me to communicate how I feel in a way that clarifies the situation for primarily myself. The longer the writing is, however, the further removed I find I become from the actual piece as I delve into a rather fictional mindset, forging characters and settings beyond that of my actual world.

2. Is there a specific creative process that you follow? Do you find yourself basing the poetry and prose that you create on the visual art incorporated into your work, or vice versa?

With my writing I find that inspiration tends to strike when I least expect it, whether browsing illustrations, reading other people’s works, or simply sitting in a lengthy car ride. I’m rarely inspired first by the visual (though I can’t say never) as writing often results as a type of release. As such, I tend to complete a piece first and have images form in my mind that match the mood—I pair up “crucifixion,” for instance, with illustrations of snails on account of my overwhelming disgust of the creatures. Reading this piece therefore becomes an uncomfortable experience, with the unsettling visuals becoming associated with the piece at hand—or, at least, that’s my intention.

3. Do you consider your writing inextricable from the visual medium in which you present it, or are they two distinct halves of a whole? How do the two affect one another in terms of content and theme?

Separately, it’s as if the words become something else beyond their visual companions; as I read and edit and reread my own work I develop my own sense of the piece’s atmosphere—adding an image to enhance this unspoken ambience allows me an additional layer of control over the reader’s perception of the work. The writing manipulates the visual into something else entirely, whilst the image henceforth intensifies the impact of the written word.

4. Visually, your works draw from the same color palette, and they share some thematic similarities as well. Are your pieces connected in any way, consciously or unconsciously? How do past pieces inform your current work?

I think everything I create inevitably proves to connect in some way or another. I have this overwhelming desire to stray from the cliche (although this sometimes proves extremely difficult to do) and on account of this, along with my distaste for repetition, I often refer to old pieces in order to shape my current work. I expect this, on a subconscious level, acts to have the opposite effect on my writing as these underlying similarities become more apparent as a result. Visually, however, I make the intentional decision to restrict the media and colours to earthy tones; the concept of incorporating seemingly normal images with obscure prose or poetry has something darkly surreal about it that I really like—besides, bright colours are often much too loud for what I’m trying to say.

5. Some of the pieces you’ve posted incorporate your work directly into an image—for example, “epilogue” plays heavily on format and visual aesthetic. What impact do you think this technique has on a piece?

I feel that tying in my writing with an image or a series of visuals forcing the reader to become immersed in the specific piece, creating more of an experience than a piece of writing. In this piece in particular, each slide literally delves a layer deeper into the earth as the protagonist progressively digs a deeper hole; in a sense, the piece itself becomes inescapable for the reader as they put themself in the boy’s position. This style has the potential to remove all control from the reader as they are guided in every aspect; from the position of the text itself, to the act of advancing to the the final slide—liberties in the interpretation of the prose become extremely difficult in a very uncomfortable way, which is an aspect of both the writing and reading experiences that intrigues me.

6. Your work embodies an impressive number of different styles, from prose to limerick. Despite your variety of styles and visuals, do you find that there is a common creative element that unites your work—a theme, maybe, or an inherent message?

What links each of my writings, I think, is the obscureness or the ambiguity of it. Writing is often hard to comprehend at the best of times, but in these moments where I simply follow my train of thought it’s difficult to decipher the true meaning of my works, further so through the strange images which come to my mind upon its completion. Oftentimes this is only truly clarified to even me when I perceive the ideas of others and relate it to what I’ve written.

7. The characters in your work are rarely described outright, but they appear so multidimensional and achingly human; in “carrier pigeon,” for example, I felt such an intense connection with your character based simply on his interactions with a bird. In your opinion, what makes a character real to a reader, more than words on a page?

When constructing characters I do my best to describe them as little as possible, ironically. I truly believe forcing an image down a person’s throat deters them from accepting the character in their own mind—people can only really empathise with a character if they are allowed a degree of control over who the protagonist, or narrator, or antagonist is. The act of characterising quirks and behaviours of the individual shapes how they will be perceived, but does not remove from their realism, and this is the notion I (try to) uphold when creating my own characters.

8. What are some of the unique challenges that come from mixing visual art with writing? Which part of the creative process do you find most difficult, and why?

Honestly, the bringing together of two art forms stands as the most difficult stage in creating my works. There is a fine line between too-much and not-enough that I have to tread very carefully; I’m so afraid of ruining the integrity of each individual piece or transforming it into something it’s not, and there have been many times when an idea I’ve had, no matter how hard I try, simply won’t work in practice. Furthermore the process is extremely time consuming, and leaves me feeling disheartened after hours of fiddling with images and text. However, when I get the result I have envisioned, the hard work feels extremely worth it.

9. In connection with the idea of challenges, what do you think some of the challenges facing teen creatives are today? What advice would you give younger teenagers starting out on their creative journey, be that in the realms of visual art or writing?

I’ve found, particularly from adults, being young but interested in artistic pursuits is looked down upon for its lack of practicality in the larger scheme of things; there is no money in it, and the competition is far and wide, but you should not view your work as a competitor in a universal race. Your fellow creatives are not here to disparage or condemn your art, but to help and support you in your journey. This is something that everyone says, but that I ignored for so long—do not give up! Starting out young in creative fields gives you an abundance of years to hone your craft. Your urge to create is a gift you should pursue, whether as a hobby or as a career, and with time will come with growth in your ability and resilience through your experiences. There are definitely jobs out there in all fields for people who are passionate about their art, but even if you are unable to find one you shouldn’t let go of your talents. Don’t let others discourage you, and be sure to push yourself to accomplish everything you want in life through your art—it might not be soon, but you are young and it will happen if you persevere.